Modern Monetary Theory and How to Build a Better Economy 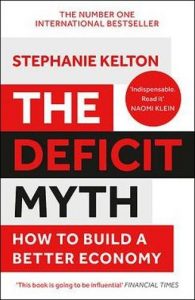 Arguing that the fear of running a deficit is vastly misunderstood, Kelton’s cogent, iconoclastic volume will be of incalculable influence to contemporary economic thought.

Supporting the economy, paying for healthcare, creating new jobs, preventing a climate apocalypse: how can we pay for it all?

Leading economic thinker Stephanie Kelton, shows how misguided that question is, and how a radical new approach can maximise our potential as a society.

Everything that we’ve been led to believe about deficits and the role of money and government spending is wrong. Rather than asking the self-defeating question of how to pay for the crucial improvements our society needs, Kelton guides us to ask: which deficits actually matter?

‘Kelton is to modern monetary theory what Milton Friedman was to American conservatives for a half century – conversational, fierce, relentless.’ – The Financial Times

‘Kelton’s game-changing book on the myths around government deficits is both theoretically rigorous and empirically entertaining. It reminds us that money is not limited, only our imagination of what to do with it. After you read it you will never think of the public purse as a household economy again. Read it!’ – Mariana Mazzucato, author of The Value of Everything: Making and Taking in the Global Economy

‘In a world of epic, overlapping crises, Stephanie Kelton is an indispensable source of moral clarity … the truths that she teaches about money, debt, and deficits give us the tools we desperately need to build a safe future for all. Read it – then put it to use.’ – Naomi Klein

‘The best book on rethinking economics that anyone will find right now.’ – Richard Murphy

‘In the wake of the financial impact of the coronavirus, she’s having a moment … she’s become a rock star in her field.’ – Ben Hoyle, The Times

‘[Kelton] has succeeded in instigating a round of heretical questioning, essential for a post-Covid-19 world, where the pantheon of economic gods will have to be reconfigured.’ – The Guardian

(Winchester Labour recommends this book to stimulate thought, discussion and the formulation of policy, it does not necessarily endorse it)